Sokcho is an ideal location for vacationing, where Koreans flock to immediately as summer approaches. The destination is located on the east coast of the Korean Peninsula and occupies a large portion of Gangwon-do, where people come to enjoy sunbathing on long golden beaches as they gaze over the East Sea’s horizon.
Besides relaxing in the shade of the many pine trees, Sokcho is also famous for its food. Before heading out for water sports, make sure to fill yourself up with some various delectable seafood morsels you can only find at Sokcho Tourist & Fishery Market. Various delights found at dozens of food stalls, carts, and street vendors are addictively delicious and will cause you to come back for more.
Afterwards, take the opportunity to visit indoor places such as Seorak Waterpia and the Teddy Bear Farm, which are great places to keep away the scorching sun and heavy crowds. There is an old Korean saying that goes, “Eating before sightseeing,” which is truly the best way to enjoy Sokcho! 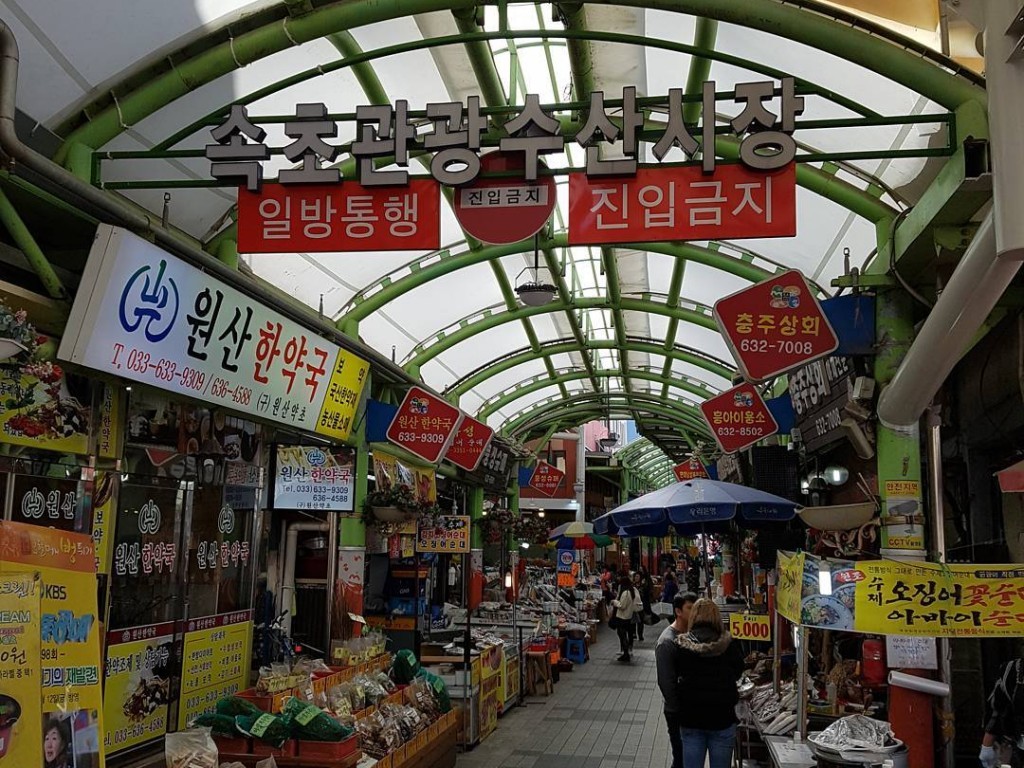 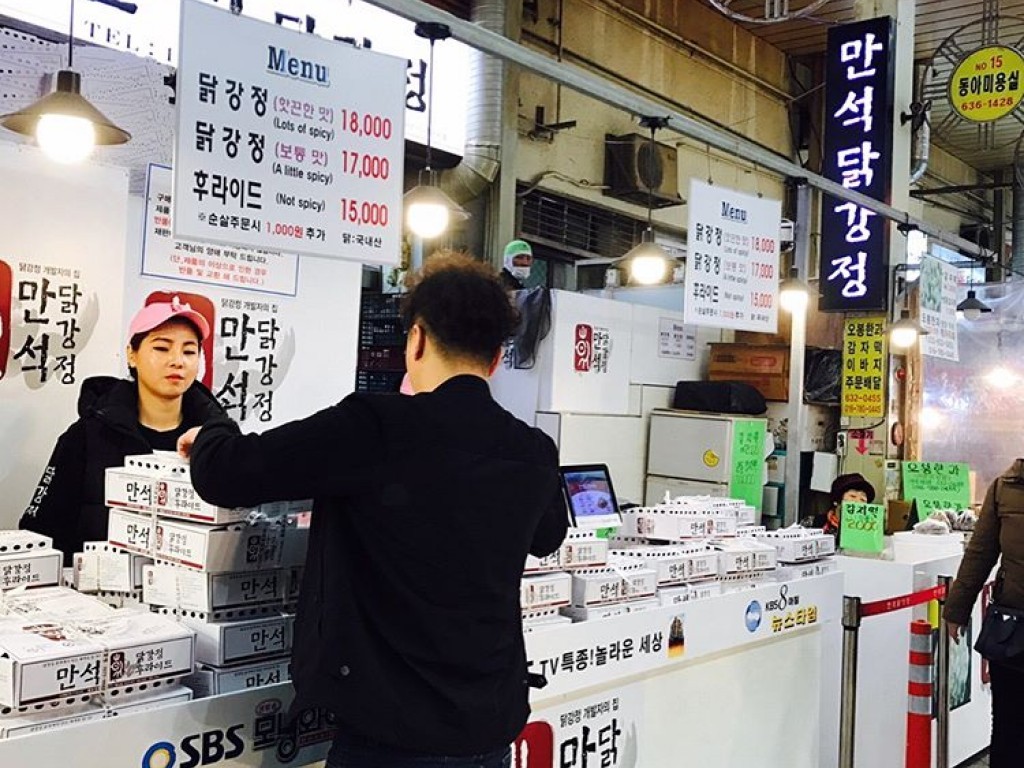 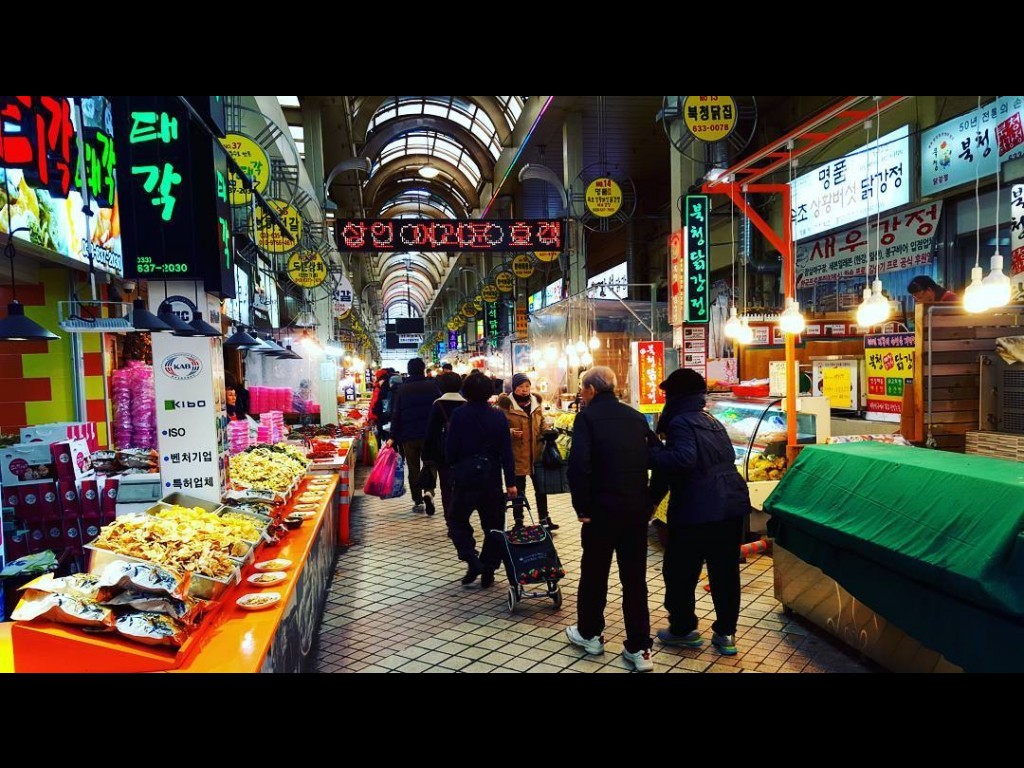 Sockho’s traditional market is full of things to see, buy, and eat. Formed in 1953 as the Sokcho Tourist & Fishery Market, it was included on the Korea Tourism Organization’s list of “Best Traditional Markets for Foreign Tourists” last year. From fresh fishes caught off the coast in the Donghae Sea (East Sea) to dried fish and various vegetables, you can find fun in just looking around and watching the fishmongers bargaining with local market goers. The best part is that it allows you to really taste and experience the true folk atmosphere of Korea. 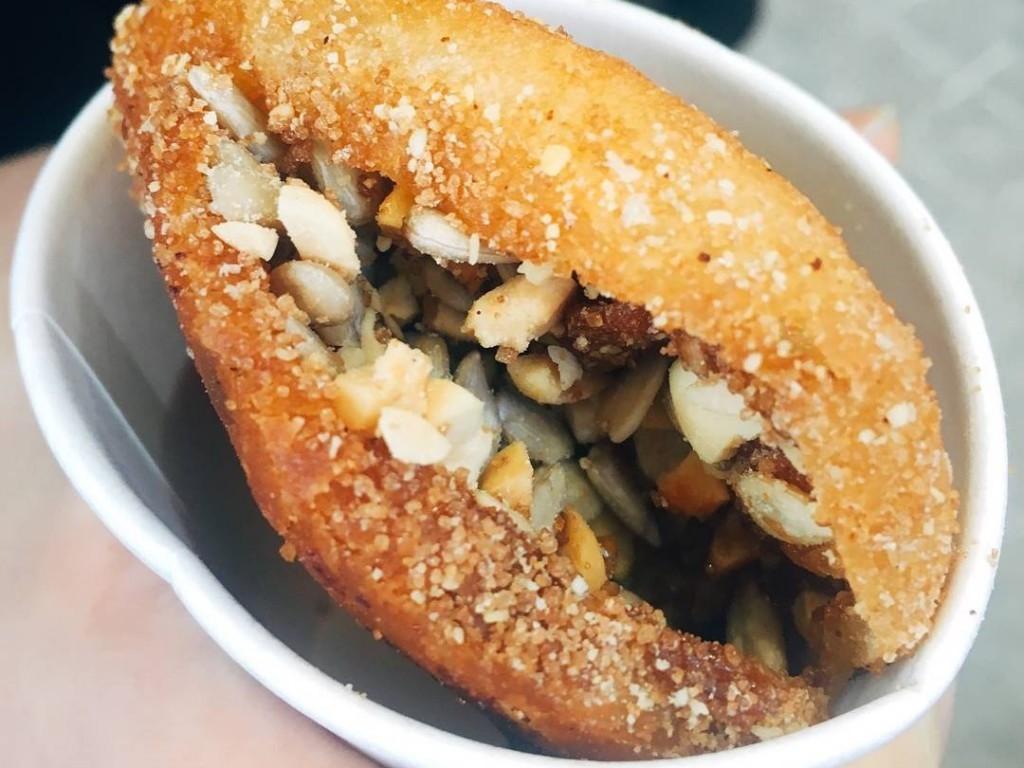 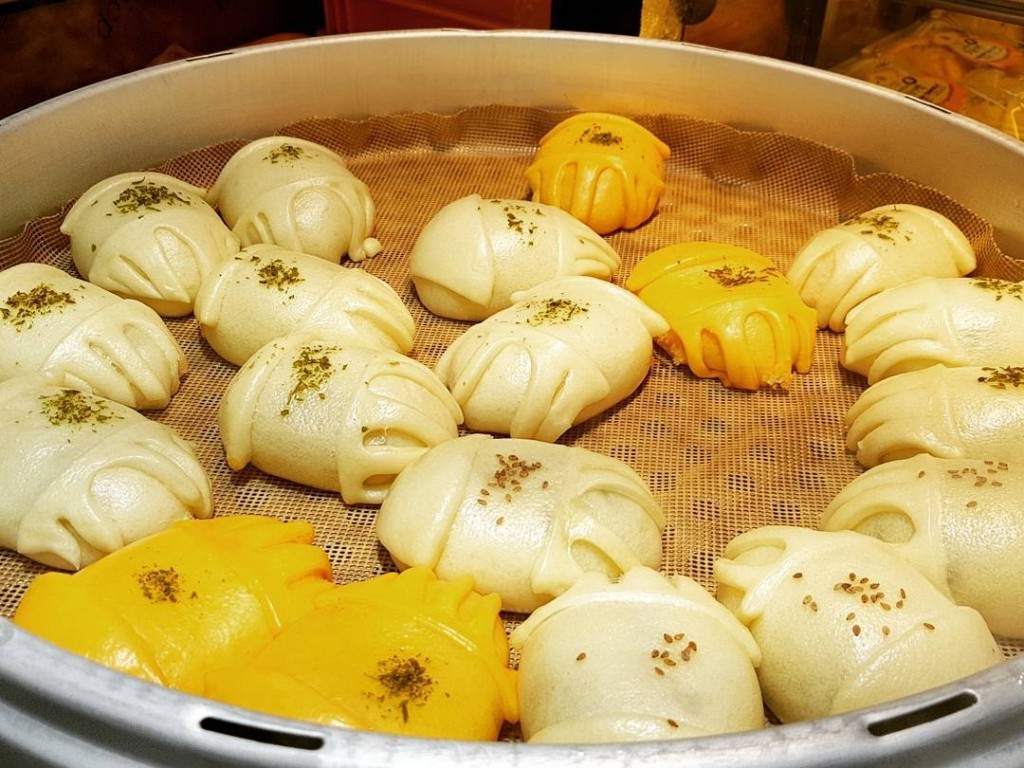 The first way to experience Sokcho Tourist & Fishery Market is to grab some snacks to munch on as you stroll through the alleys. Among them, the most common is hotteok, a flat donut-like treat made from lightly-fried dough and filled with sugar, nuts, and cinnamon. You can find ssiat-hotteok or obang-hotteok at the market as well. Both have delicious sugary tastes, although ssiat-hotteok is fried well and stuffed with various nuts to give it a crunchy feel, whereas obang-hotteok is lightly grilled to give it a softer, doughy feel. Besides, the Sokcho Tourist & Fishery Market is also famous for their squid-shaped buns that have a variety of flavors for customers to choose from. In particular, buns with squid fillings are one of the top sellers for its chewy texture. 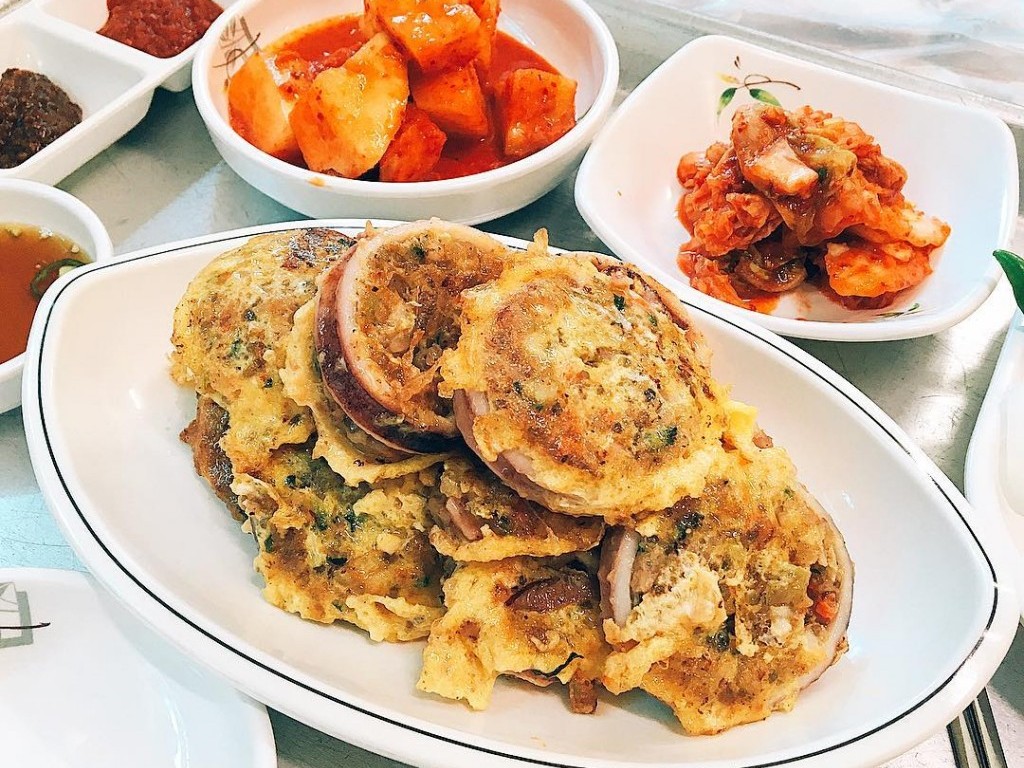 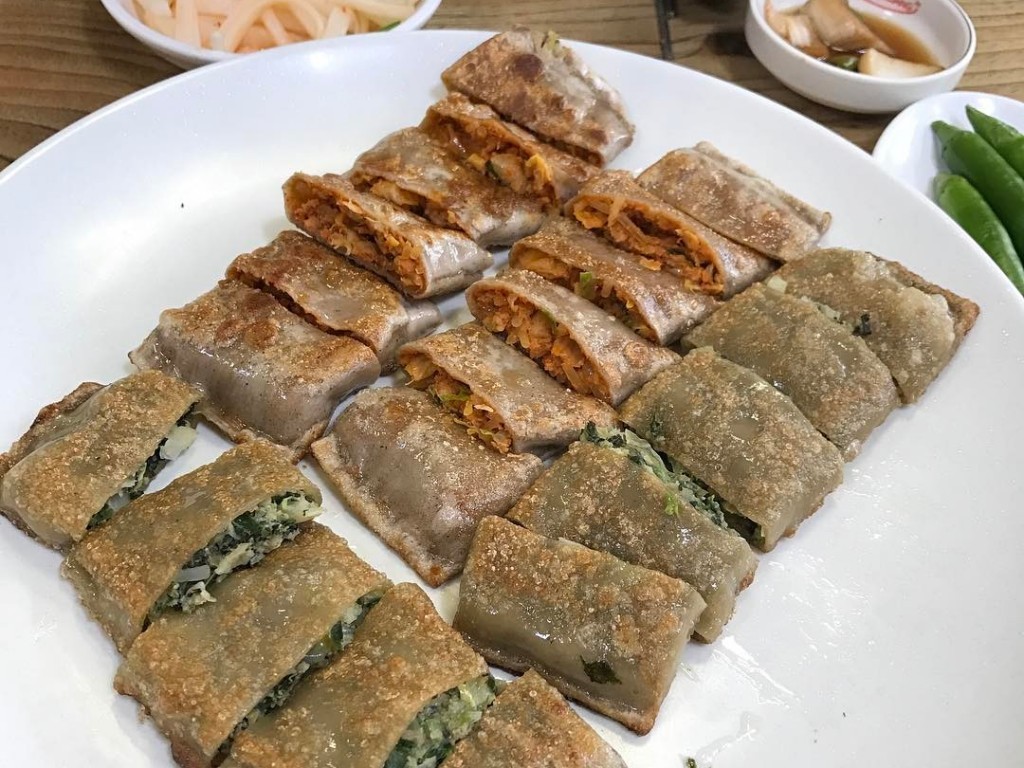 The second way to experience the market is to take a seat, watch the many passersby, and feast in some of the traditional food, the most well-known of which is ojingeo sundae (Korean sausage with squid). Various vegetables are stuffed into a squid and steamed so you can taste the light taste of the vegetables but also the hearty taste of the squid. There is also memil-jeon (buckwheat Korean pancake) with kimchi and chives, as well as memil chong-tteok, rice cakes made with buckwheat and full of meaty pork and chopped kimchi. Through these foods, you can taste the simplicity of traditional Korean foods, where the spicy taste of the kimchi complements the soft, clean taste of the buckwheat to give you an overall pleasant eating experience. 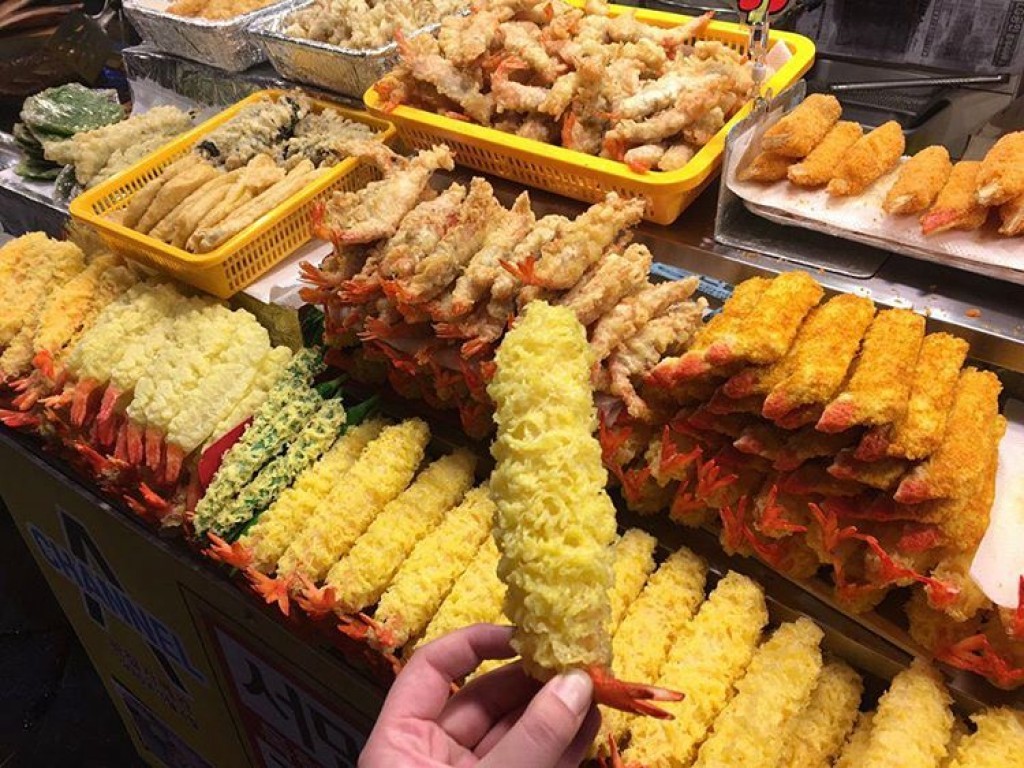 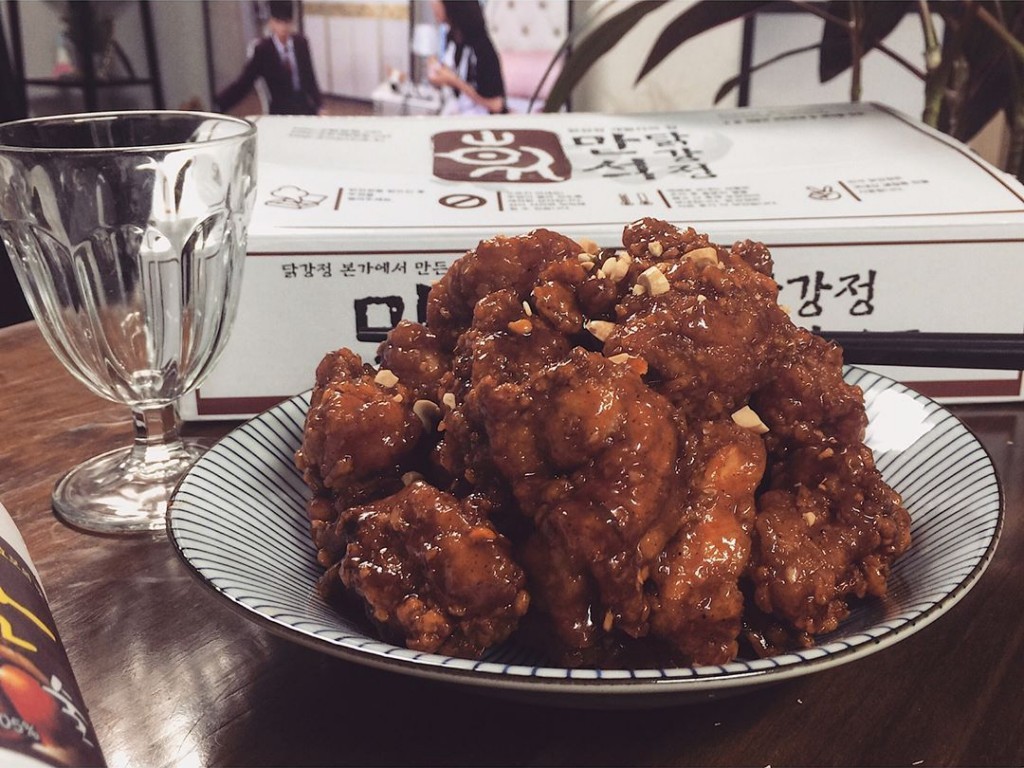 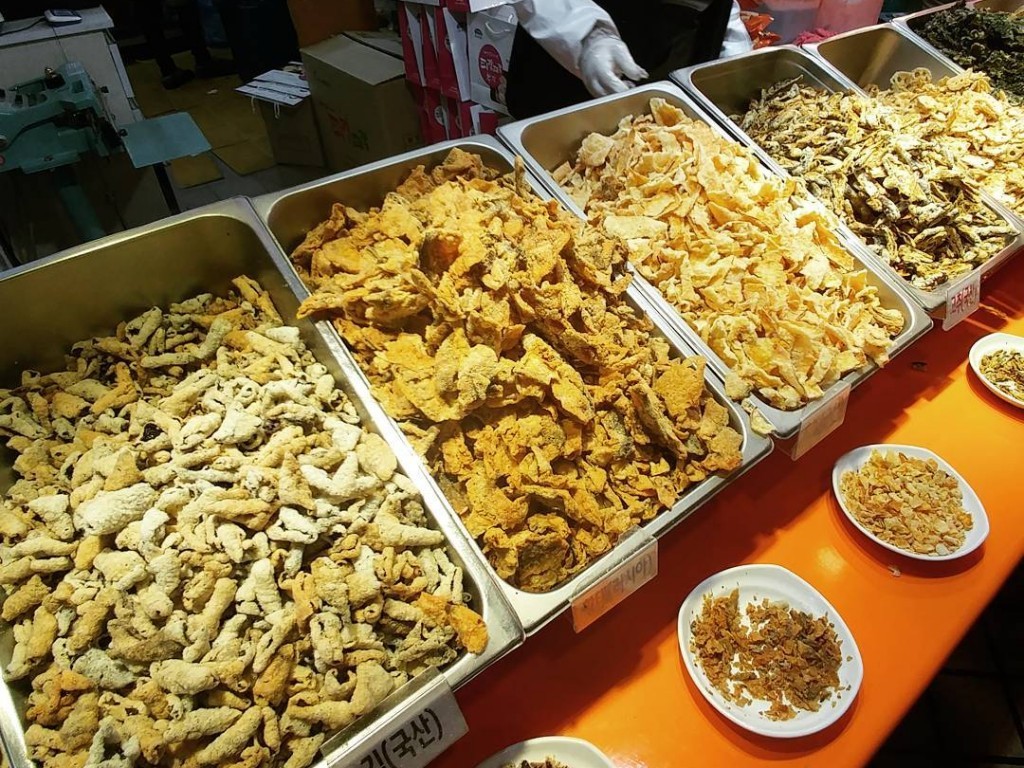 The third way to get the most out of the market is to buy a gift for friends and family and the most popular gift in the market is Dakjeon Golmok’s dakgangjeong (sweet and sour chicken). Chopped up pieces of chicken are deep-fried and dipped in a sweet and sour glaze, giving it a much more delicious taste than regular deep-fried chicken. If you go on the weekend, you’re bound to see long lineups of market goers eagerly waiting their turn to get their paws on some dakgangjeong, and others who have already got theirs walking around the market snacking on the delicious treat. For those who like a more savory taste, enjoy some jeon (Korean pancake) made of chopped up and sautéed fish or vegetables, or try some deep-fried shrimp, squid, or vegetables.
☞ Address: 16 Jungang-ro 147 beon-gil, Sokcho-si, Gangwon-do
☞ Directions: Take a local bus at the Sokcho Bus Terminal for about 13-18 minutes.
☞ Website: www.sokchomarket.com (Korean only) 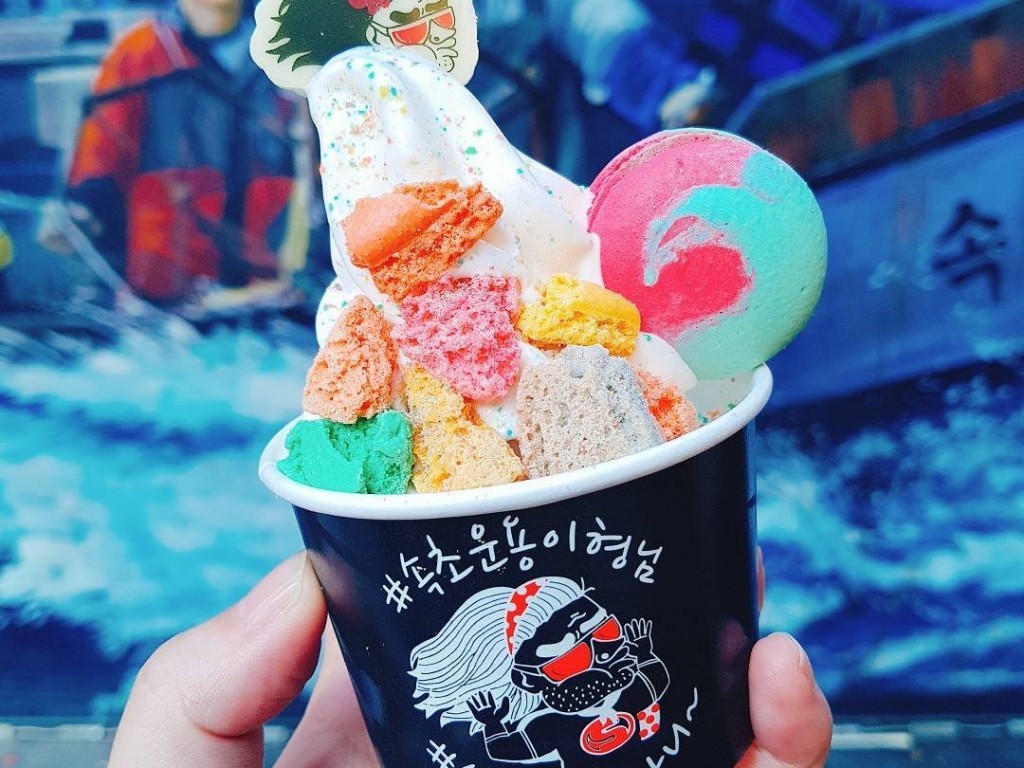 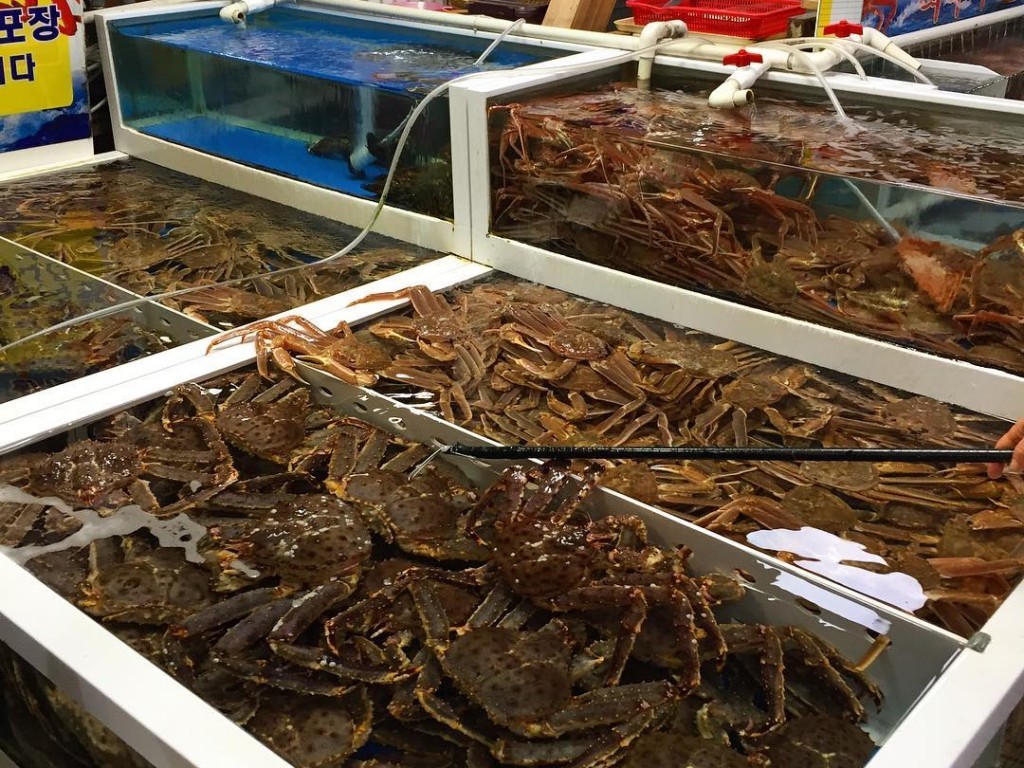 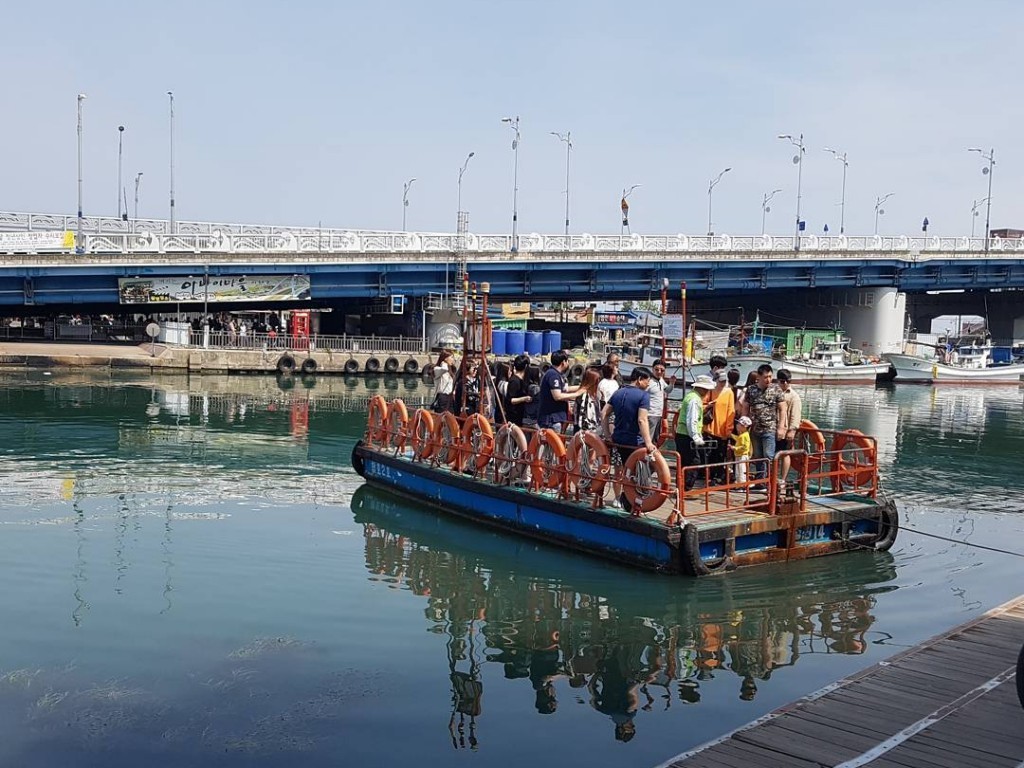 When the Korean War broke out in 1950, a large portion of the older population in Hamgyeong-do (currently belonging to North Korea) fled to Abai Village for safety, and settled down there after the 1953 ceasefire. With the aged population, the term abai, meaning “elderly man” or “grandfather” in the local dialect, ended up sticking as the areas’ nickname.
It is also well-known for being a filming location of ‘Autumn Fairy Tale (2000)’, where Eun-seo, the leading actress, lived as well as made a dramatic reunion with her love. Couples who like to remake their romantic scenes frequent the area, which tend to make their trips more memorable.
Abai Village is located between Sokcho Tourist & Fishery Market and the waterway connecting Jungang-dong and Cheongho-dong, with just about 50 meters between each side. Hence, visitors are required to take the Abai Village Ferry (also known as gaetbae in Korean), which is operated by a ferryman pulling ropes in the desired direction. It trudges along at slow speeds, but passengers can also try pulling the rope, making it a fun experience.
☞ Address: 122 Cheongho-ro, Sokcho-si, Gangwon-do
☞ Directions: From Sokcho Tourist & Fishery Market, go to Jungang-dong gaetbae ferry dock to reach the village.
☞ Fees (Abai Village Ferry): One-way 200 won / Round-trip 400 won
☞ Website: www.abai.co.kr (Korean only) 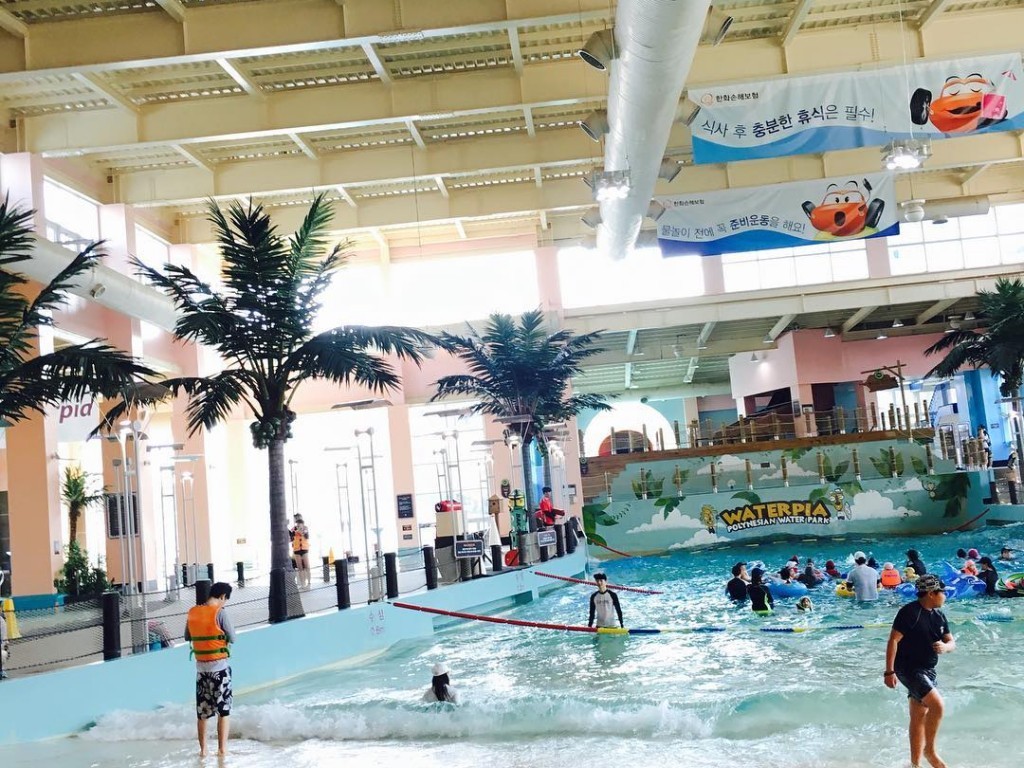 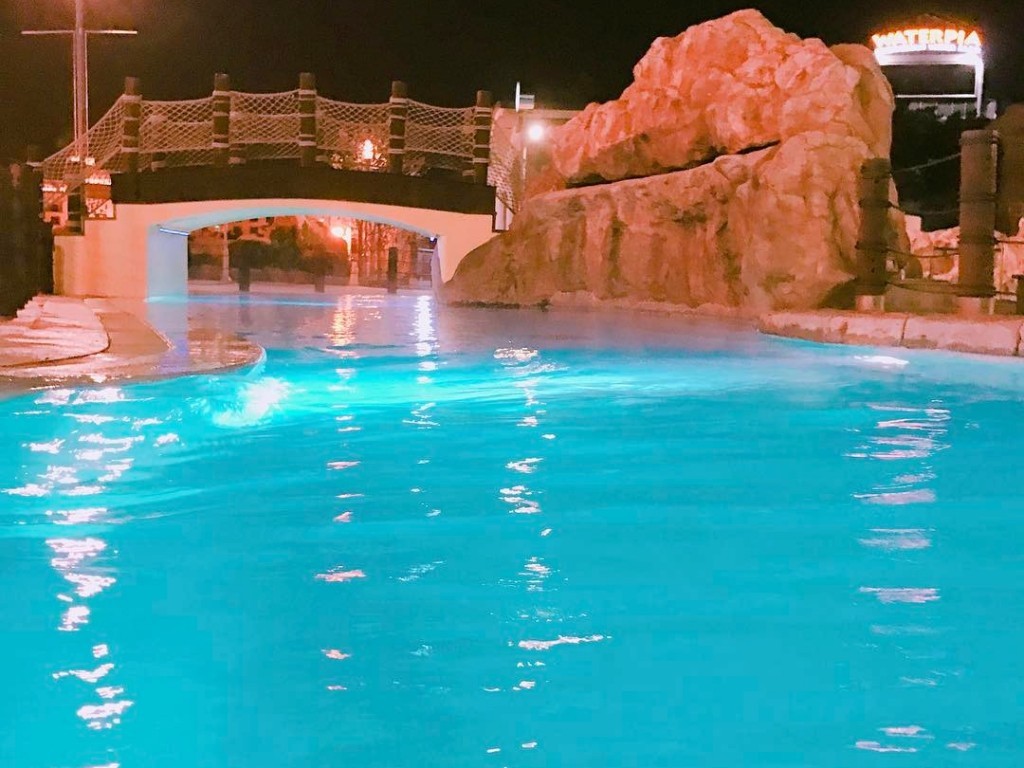 Seorak Waterpia is one of Korea's largest theme parks, offering a wide variety of outdoor leisure activities and hot spring facilities. Facilities at this waterpark include a spa, a wave pool, a stream pool where you can follow the current of the water, as well as exciting waterslides.
But what makes Seorak Waterpia special is the fact that they only use pure mineral water originating from Cheoksan Mountain, and is maintained at a temperature of 49℃. The water comes from a geological layer formed during the Mesozoic Era, and with the abundance of cations (sodium, calcium, and magnesium) and anions (chlorine, carbonic acid, and sulfuric acid), the mineral water is good for stress, neuralgia, arthritis, and geriatric-related conditions. In addition, there are outdoor leisure spa facilities, such as Lovers Bath, Rock Bath, Cave Bath, and sauna facilities like Prickle Bath, Wood Bath, Outdoor Bath, and more.
☞ Address: 88 Misiryeong-ro 2983 beon-gil, Sokcho-si, Gangwon-do
☞ Directions: From Sokcho Tourist & Fishery Market, take local bus for about 32-36 minutes.
☞ Operating hours (Ticket Office): 06:00-20:00
* Hours may vary during peak season (2016.04.30-2016.07.08).
☞ Fees: 30,000 won - 60,000 won (Based on admission for adults)
* Above mentioned fees are based on peak season (2016.04.30-2016.07.08). Fees are subject to changes according to seasons.
☞ Website: www.hanwharesort.co.kr (Korean, English, Japanese, Chinese) 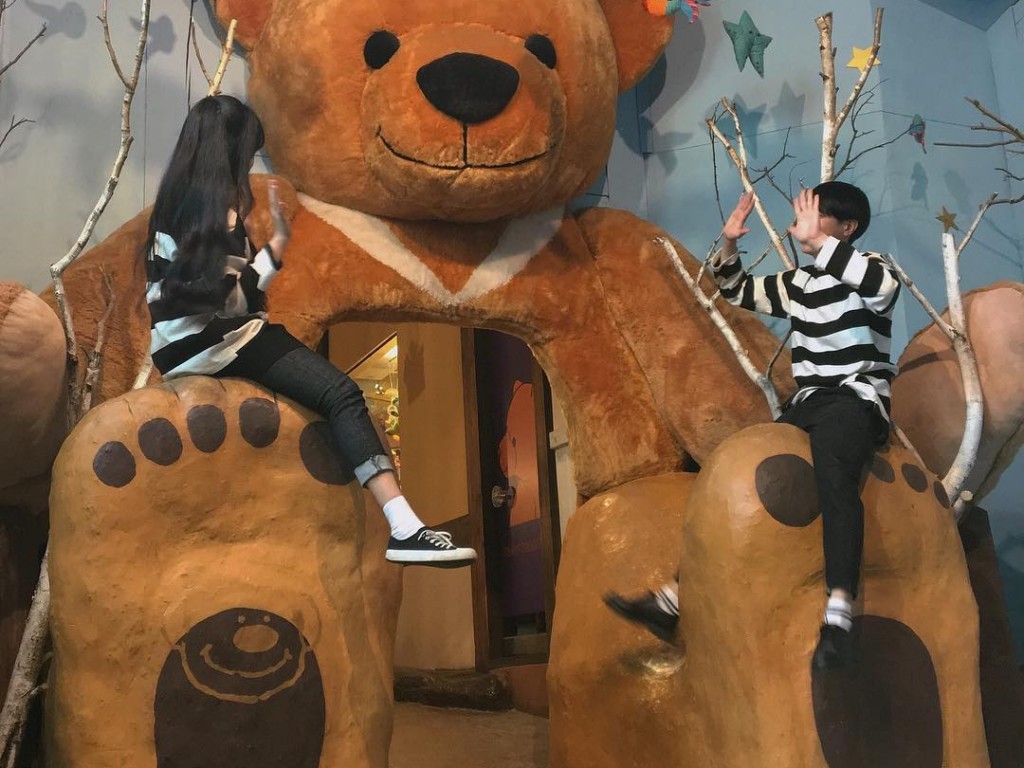 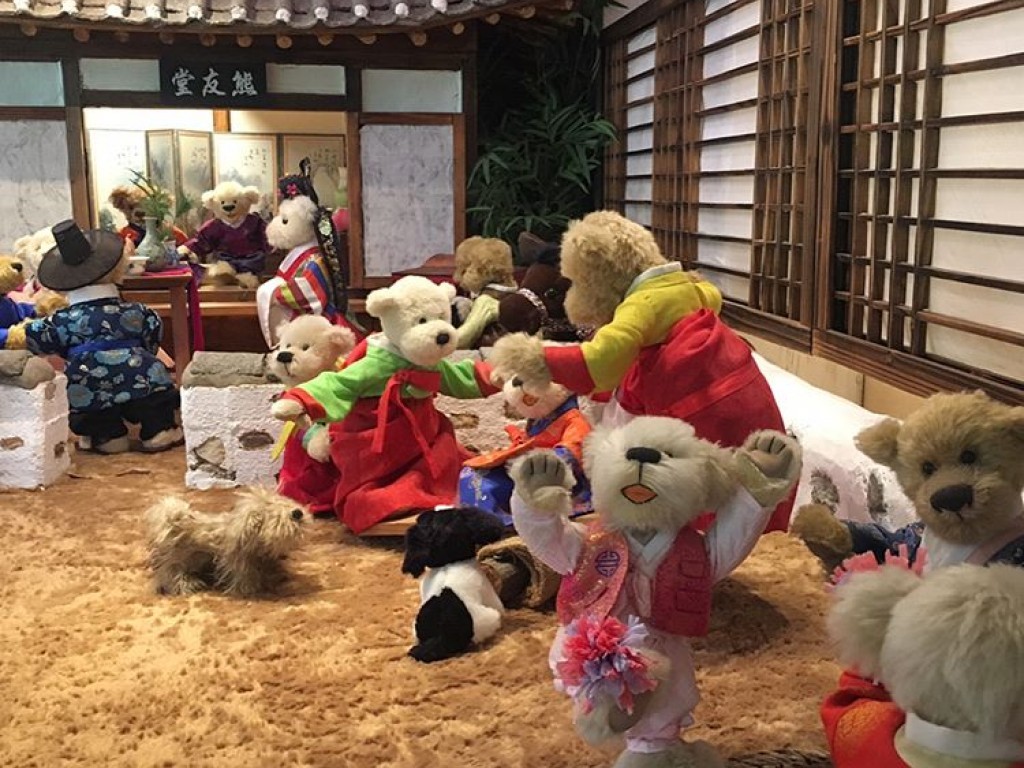 Teddy Bear Farm is adorned with cute teddy bears like those in a fairy tale kingdom. Teddy bears come in a variety of sizes from life size bears to tiny bears, including teddy bears depicted as mountain climbing on Ulsanbawi Rock, skiing, playing golf, and even riding the Abai Ferry from Abai Village to downtown! Also, the teddy bears have different postures and costumes recreating commonplace scenery of the Sokcho community.
Also, a demonstration of the fairy tale “Snow White” is displayed, and teddy bears are dressed in folk costumes from around the world. Visitors can purchase teddy bears at the gift shop, and there are also some learning programs for teddy bear fans.
☞ Address: 15 Haksapyeong 2-gil, Sokcho-si, Gangwon-do
☞ Directions: From Sokcho Bus Terminal, take a local bus for about 37-43 minutes.
☞ Operating hours: 09:30-18:00
☞ Fees: Adults 5,000 won / Teenagers 4,000 won / Children 3,000 won
☞ Website: www.teddyfarm.net (Korean only) 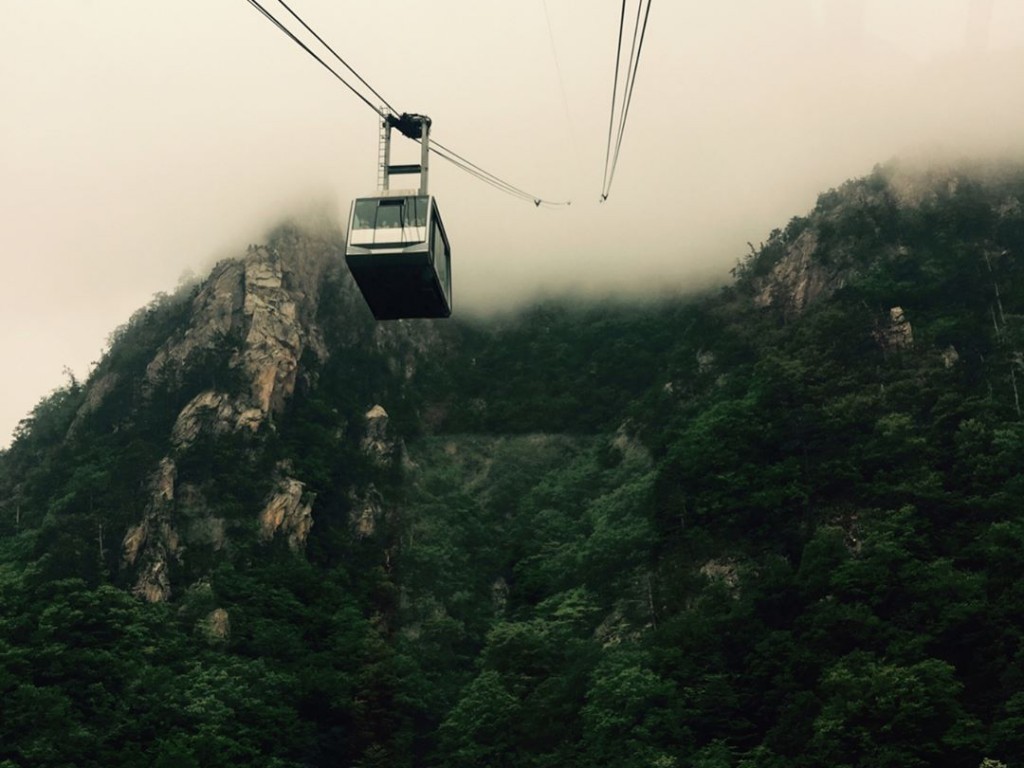 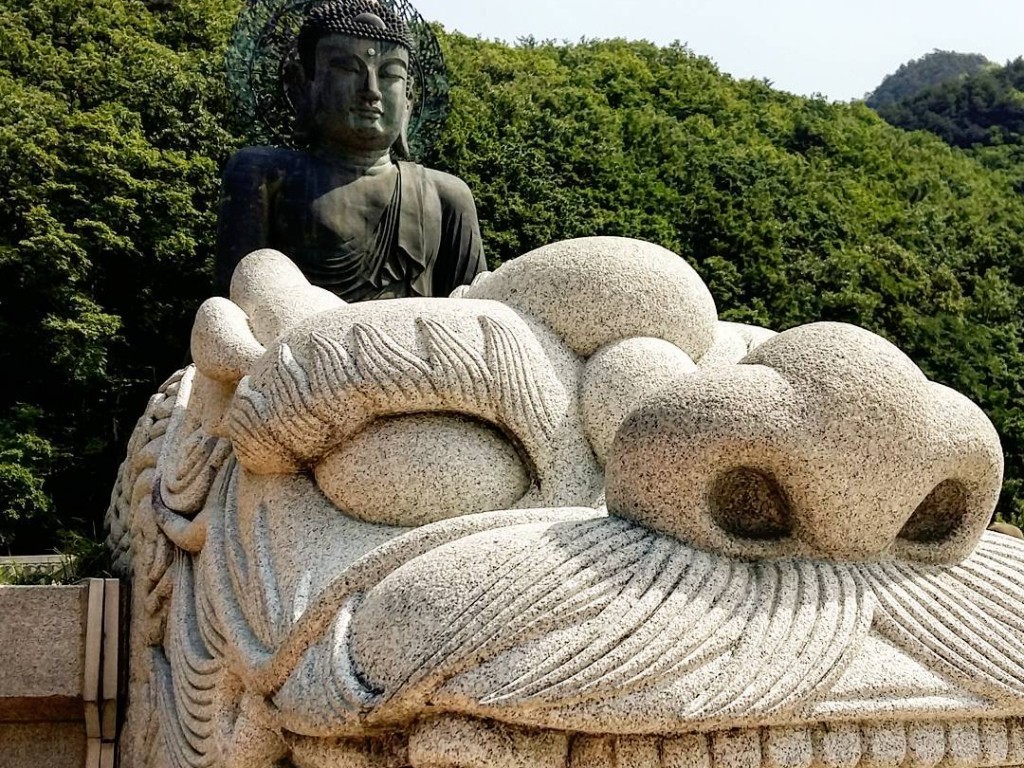 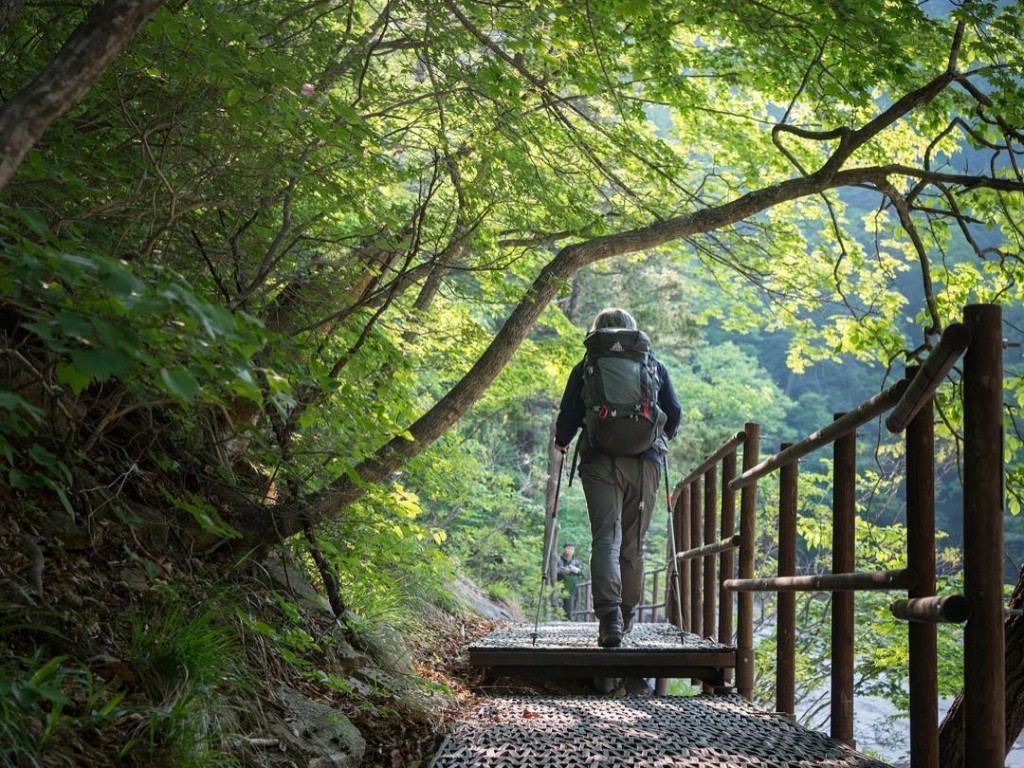 The area of Sokcho includes what is considered to be the most beautiful mountain in Korea, Seoraksan Mountain. Its natural sights are so beautiful that the mountain was designated a natural monument preservation area in 1965. Although the slopes are very steep, many professional and amateur climbers come to test their ability throughout all the seasons.
For those not into serious hiking, there is an alternative way to get up the mountain. The easiest way to go up is by taking a cable car that connects Sogongwon Park and Gwongeumseong Fortress. After hopping off the cable car, you only need to complete a 300m walk to reach the fortress. From here, you may catch breathtaking views of the Ulsanbawi Rock of Seoraksan Mountain. Also, a mere 10 minutes walk from Sogongwon Park will lead you to Sinheungsa Temple, which makes it a good trail for visitors to take a leisure walk. 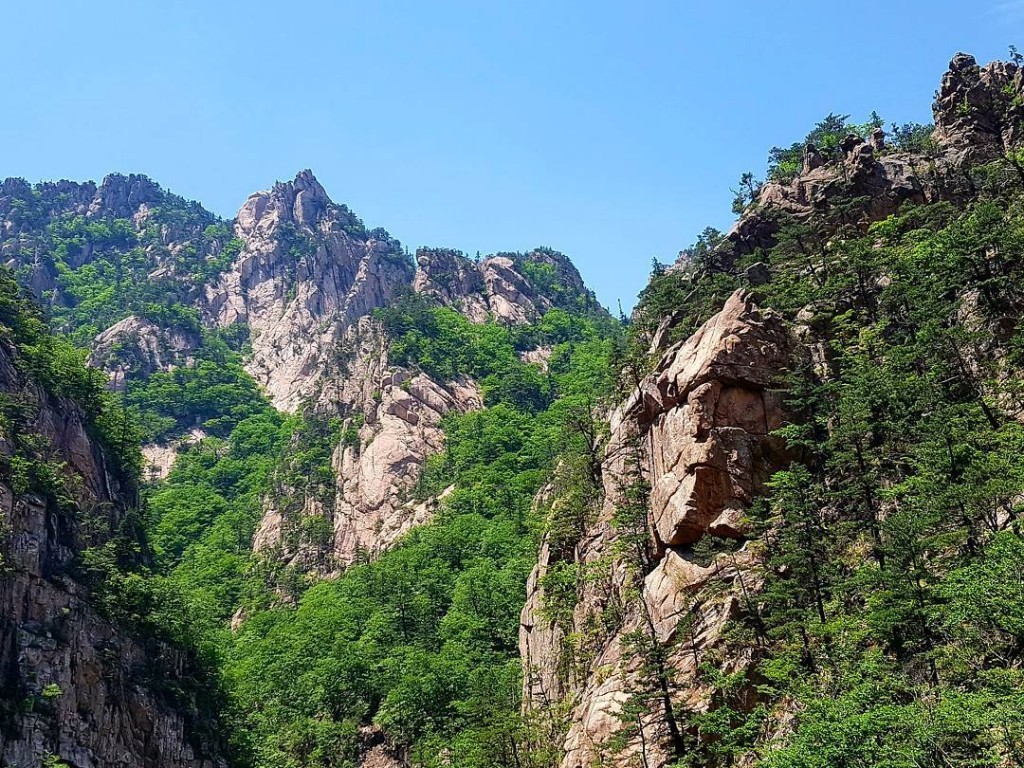 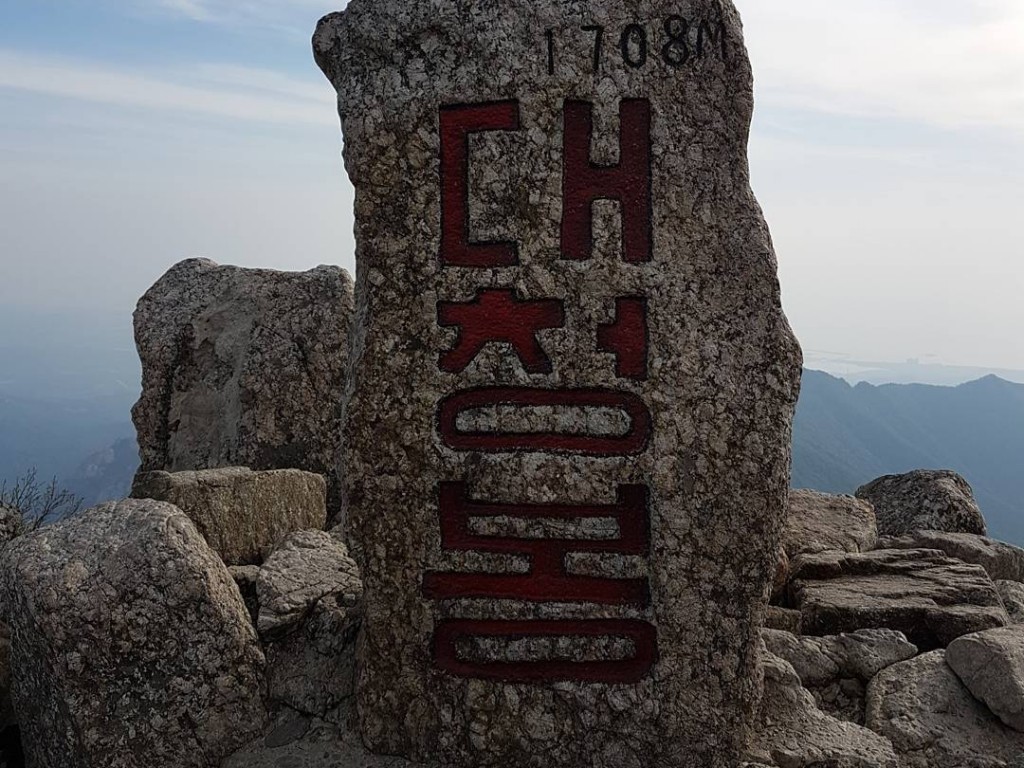