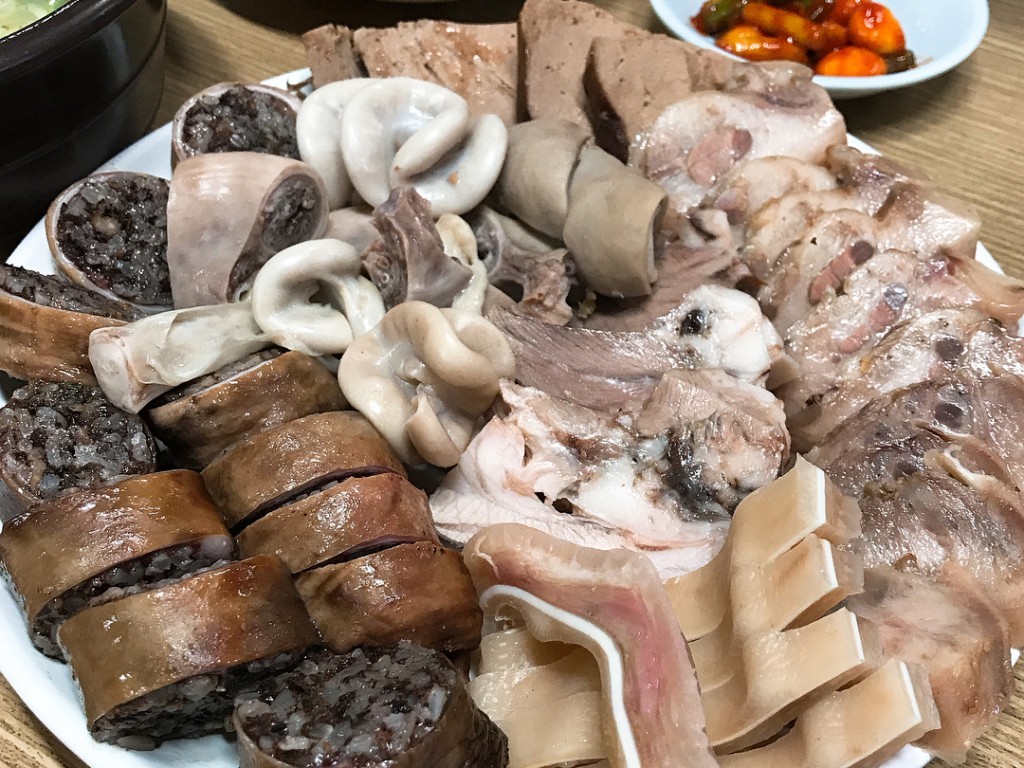 A cup of searingly hot oden (Fish Cake) broth, the sweet and burning hot pieces of roasted yams, the steamy bungeo-ppang (Fish-shaped Bread) are all foods we start to crave when the weather gets colder. In fact, food isn’t just eaten simply for the sake of taking in nutrient anymore. They can be eaten to evoke certain memories and emotions as well. For example, tteokbokki (stir-fried rice cake) can become a memory of a traveler’s first trip in Seoul, while a bowl of janchiguksu (banquet noodles) can become a memory of sadness to someone heading to the pojangmacha (tented street stalls) after a bitter rejection. Food can also be a source of great happiness. Gathered around a dinner table and chatting and laughing away with close friends and family will fill anyone up with cozy warmth and joy. Taking it a little further, food can also play a very important part in international diplomacy. One such example of a dish which helped improved relations between North and South Korea was the Pyeongyang naengmyeon (Pyeongyang-style cold buckwheat noodles). 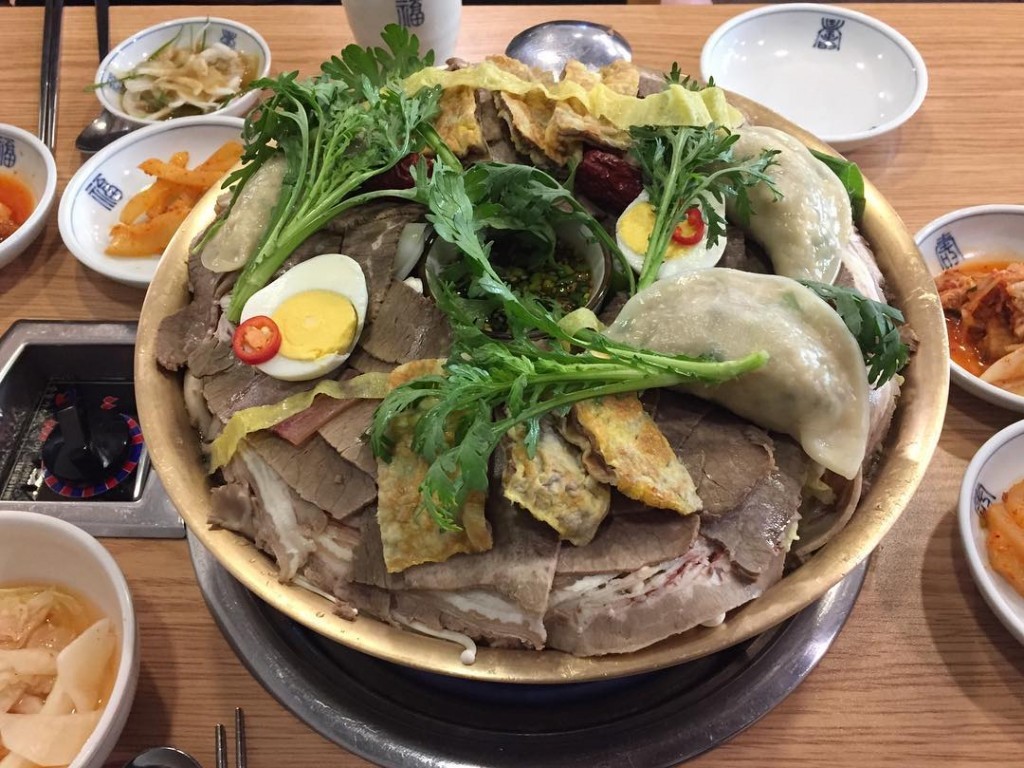 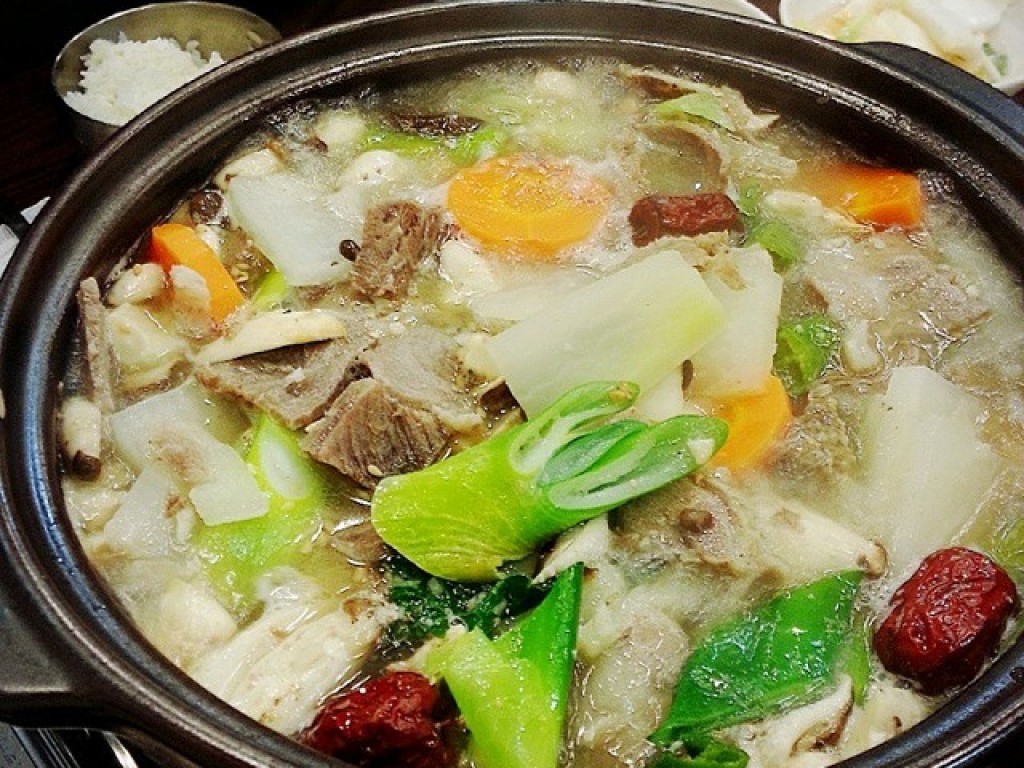 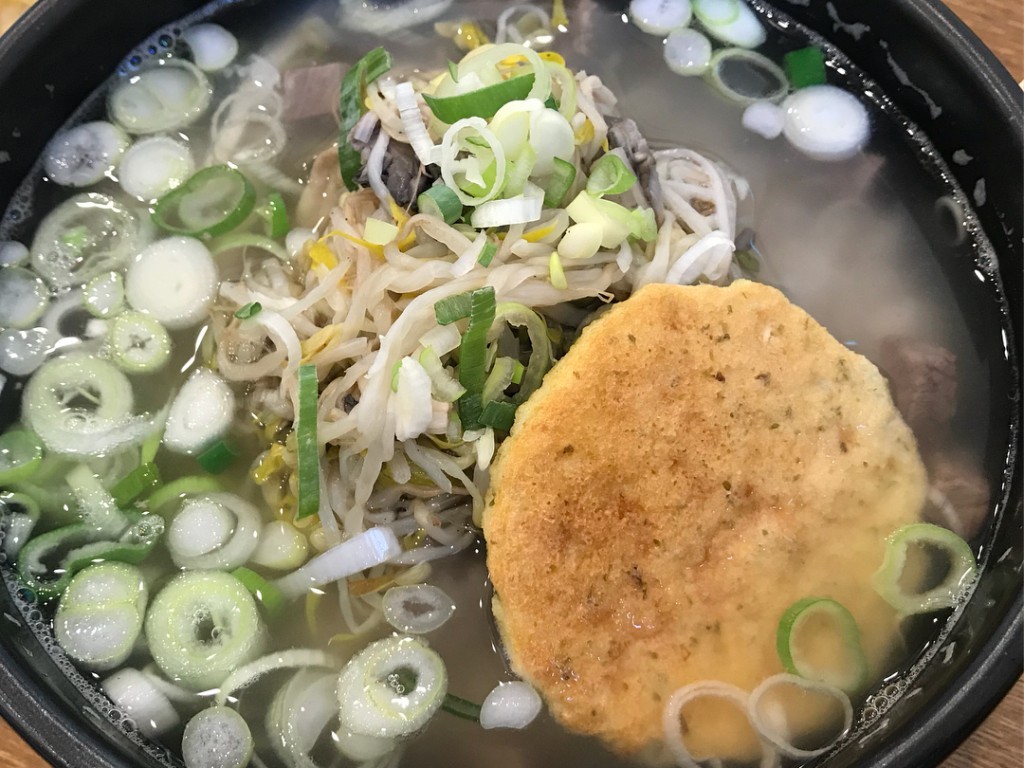 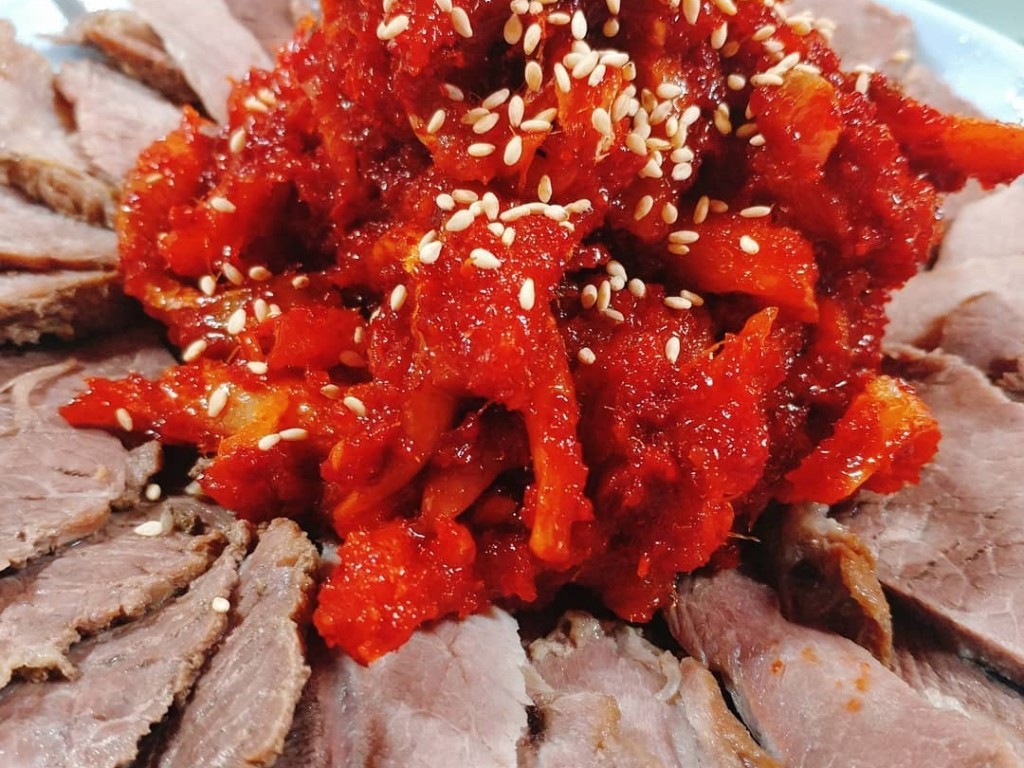 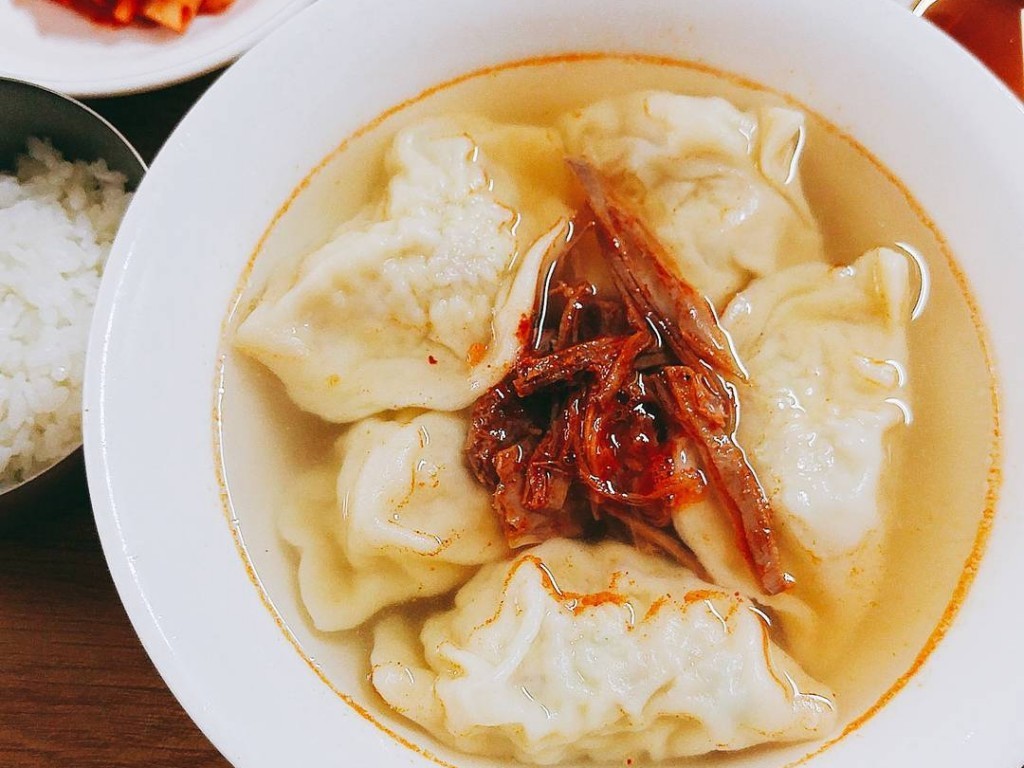 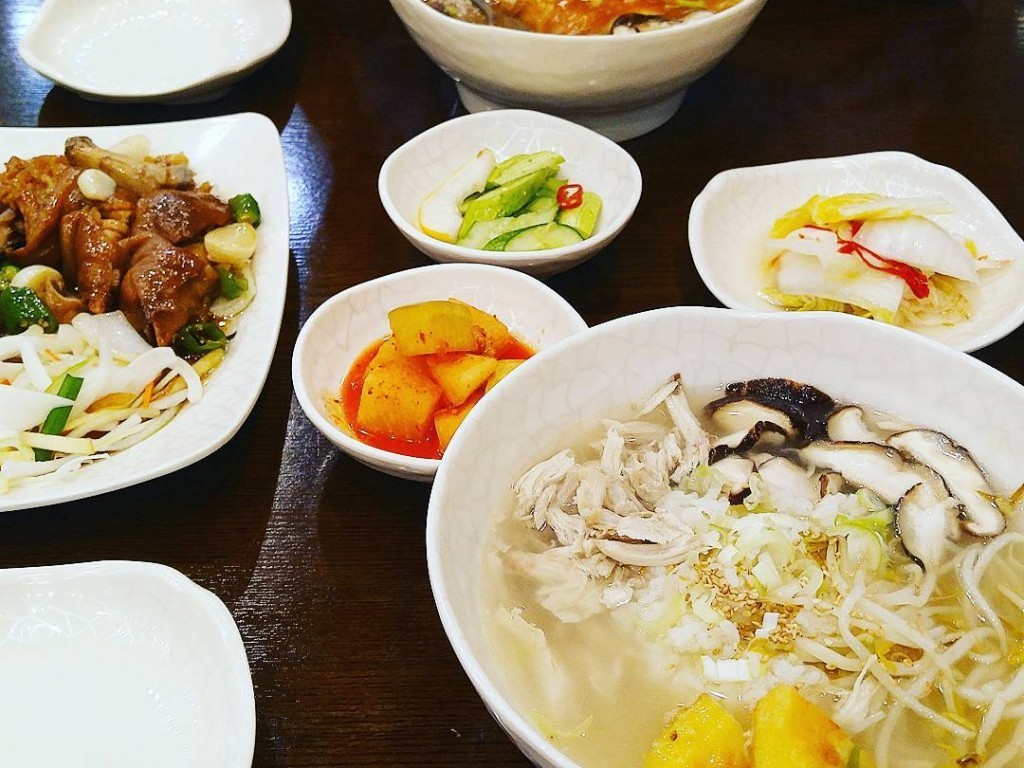 The Korean summit sparked a craze for Pyeongyang naengmyeon not only in Seoul, but the entire world, leading hordes of people to line up outside every store that sold this particular dish this past summer. If the cool and refreshing Pyeongyang naengmyeon became a memory of the past summer’s scorching heatwave, get ready to warm yourself up with some memories of some hot North Korean food this upcoming winter. Only in Seoul will you be able to find and taste some very unique and interesting North Korean food.

Eobok Jaengban
Like its name, this dish is a type of hot pot dish in a large tray. A dish representing Pyongyang, various meat parts (beef brisket, boiled pork, pork breast, beef tongue) and vegetables are doused in broth and boiled in a brass tray. It’s the perfect kind of dish to eat out with friends and family on a chilly winter day. 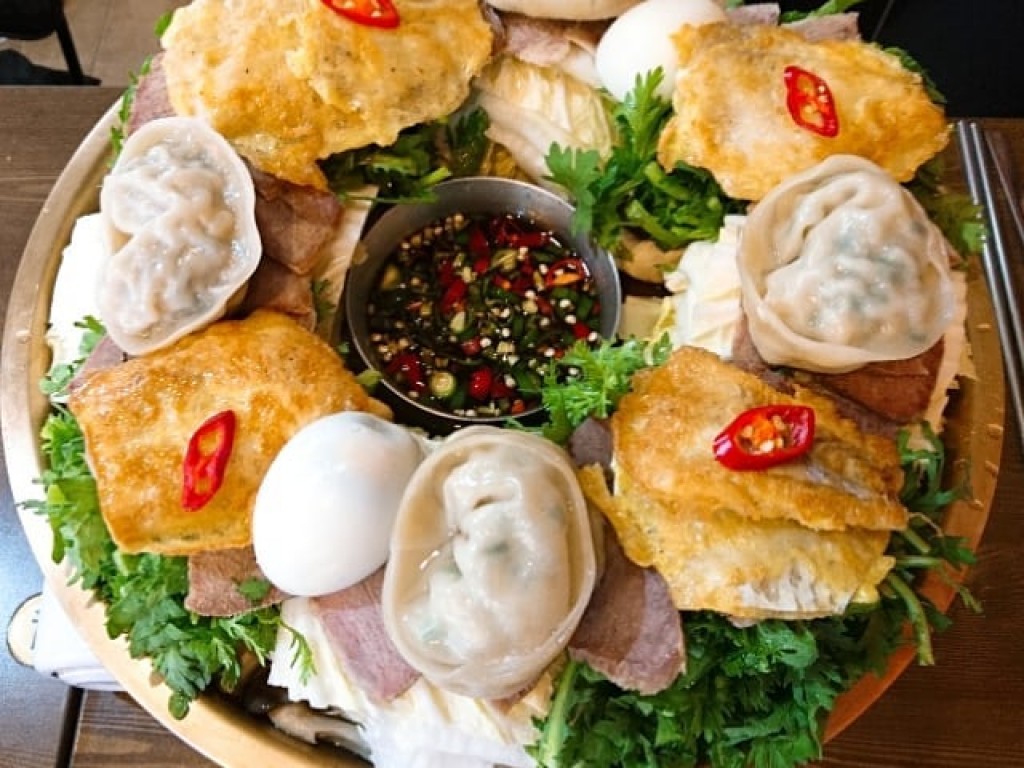 Wooseulcho is a restaurant which has been passed down three generations. The ingredients put in the Eobok Jaengban dish differs by restaurant, but Wooseulcho is known for including a handmade dumpling made with dough which has been fermented for 3 days. Jeon, meat, and other ingredients are also added into the dish along with the restaurant’s special broth, leading to a deeper, more savory tasting Eobok Jaengban. 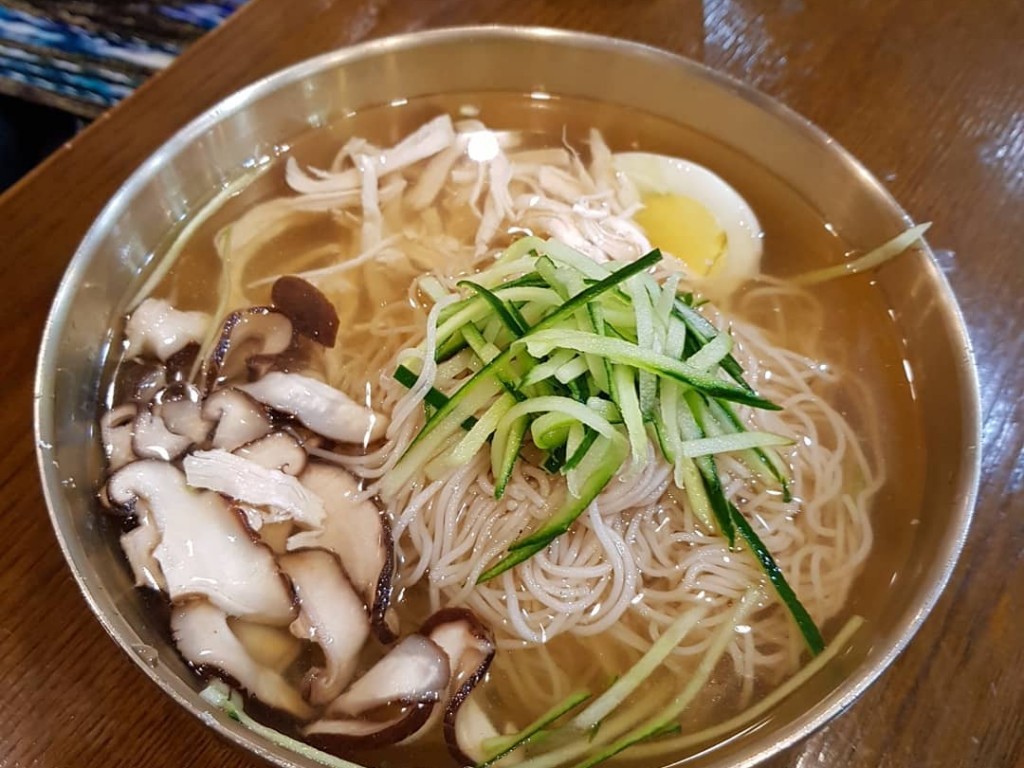 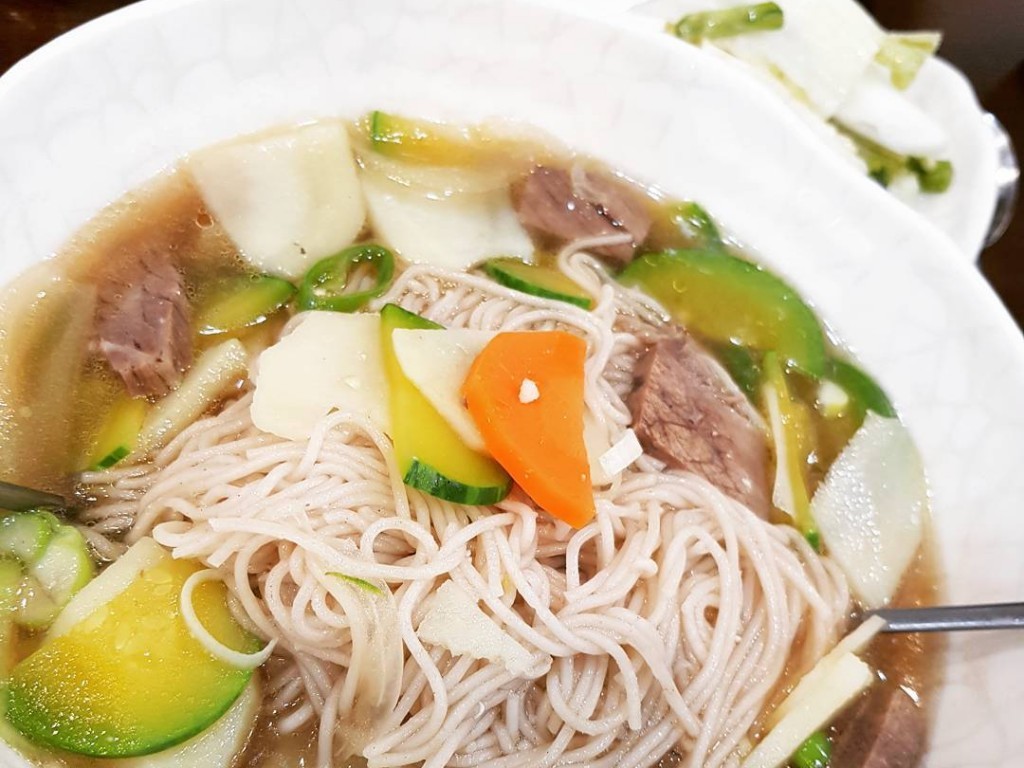 Mujjim? “Steamed radish”? It’s hard to imagine what kind of dish this is from just hearing its name. If we had to compare, the closest South Korean version this dish would be the beef radish soup. But instead of soup, this dish is filled to the brim with thick cubed radishes, pork, and beef. Once you eat it, this healthy dish will gradually warm you up inside and chase away the winter chills.


Pyongyang Onban
“Isn’t this nokdujeon (Mung Bean Pancake)?” The top of the Pyongyang Onban is garnished with nokdujijim (North Korean mung bean pancake), a very unusual topping to see on top of a rice soup. One of the main dishes representing Pyongyang, this dish has a similar taste to dak gomtang (Chicken Soup) due to its chicken broth. But the addition of ingredients like mung bean sprouts, chicken breasts, and garnishes lends this dish a unique, one-of-a-kind flavor.

Neungra is an island in the Taedong River of the Pyong’an Province. Neungra Bapsang is a restaurant known for its Gaeseong Mujjim and Pyongyang Onban, dishes which both met with our editor’s approval. Not containing any MSGs, the dishes of this restaurant gives off a deep flavor, a courtesy of their great chicken broth.


Pyongando Manduguk
Although dumplings are a familiar dish, the shape and taste vary greatly by regions. Pyong’an province-style dumplings are big, crude, and don’t really have a strong, sharp flavor. Interesting enough, there aren’t any onion, cellophane noodles, or chives in their fillings. Eating one of these will have you feeling stuffed in no time. 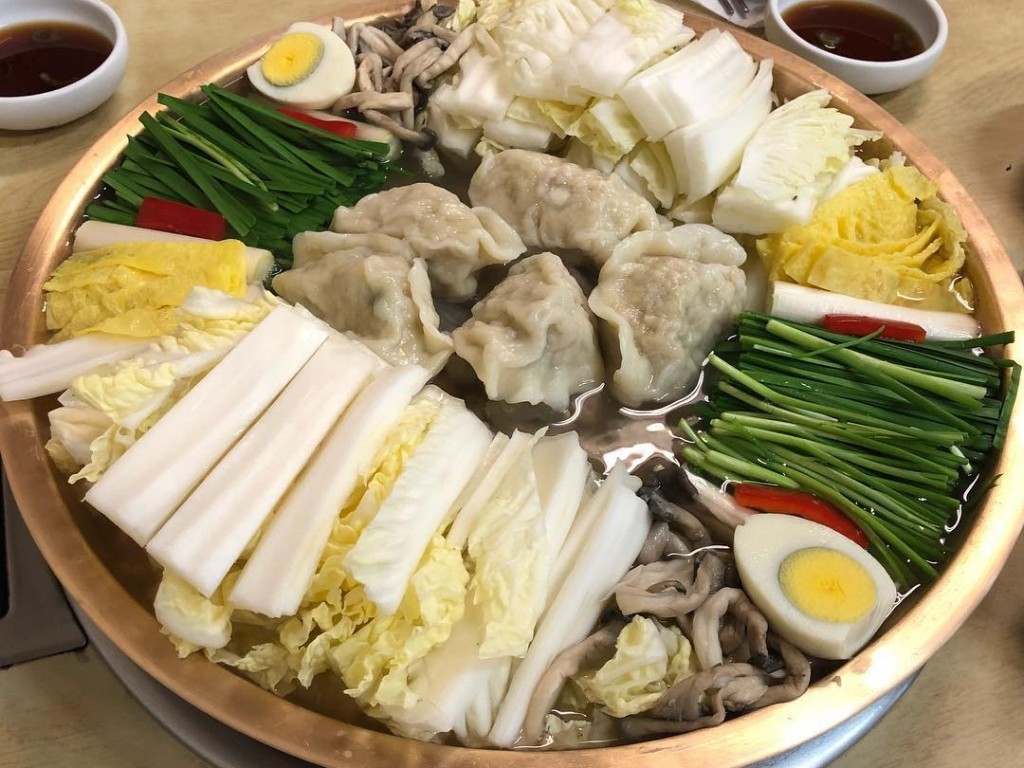 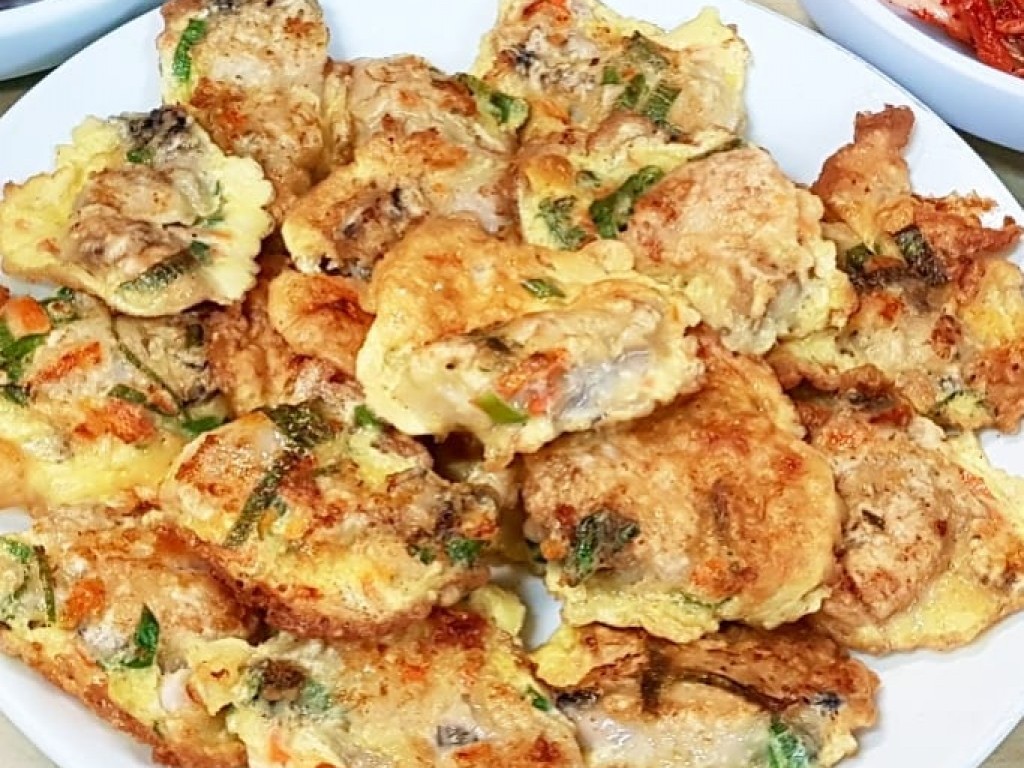 Pyongan Dumpling House
30 Saemunan-ro 3-gil, Jongno-gu, Seoul
+82-2-723-6592
After appearing on a Korean TV show, Pyongan Dumpling House is always crowded with customers during the night. A place to head towards after work with your coworkers where you can gorge on a large stew with the famed Pyongan dumplings, it’s easy to see why this place is so popular. 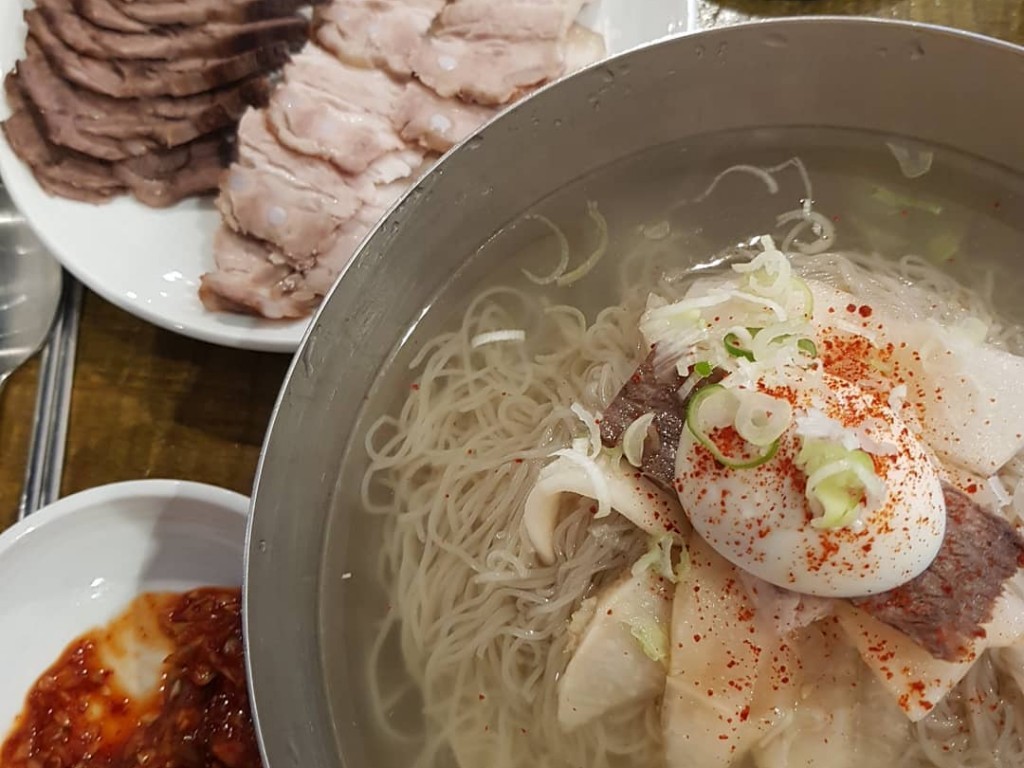 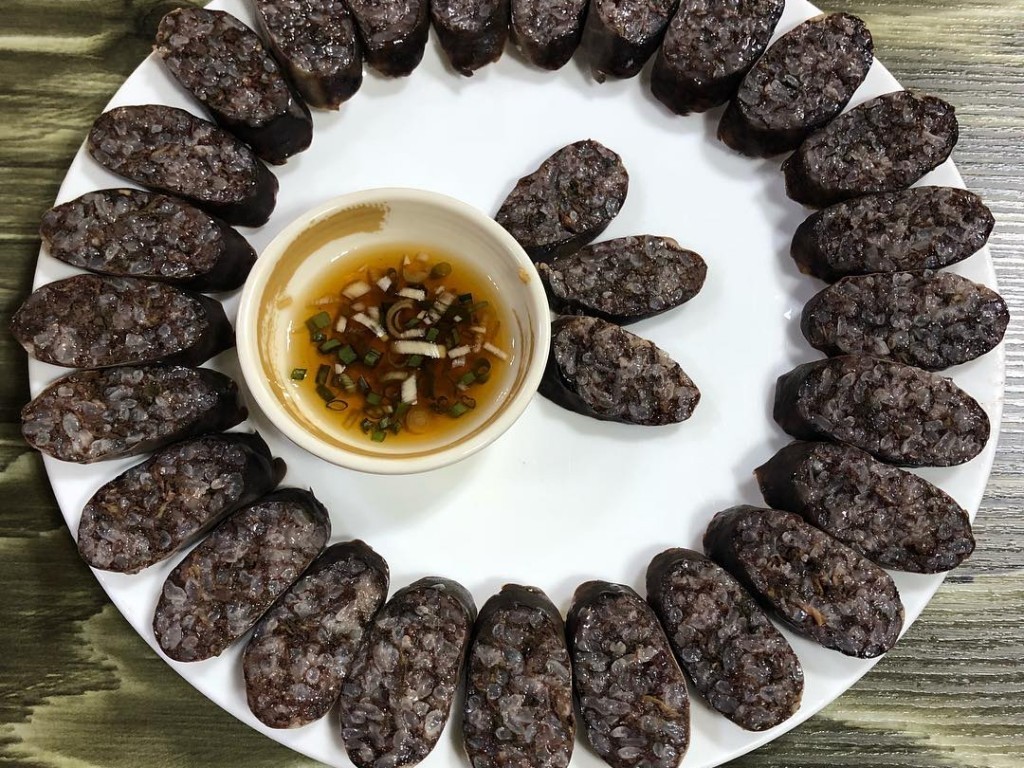 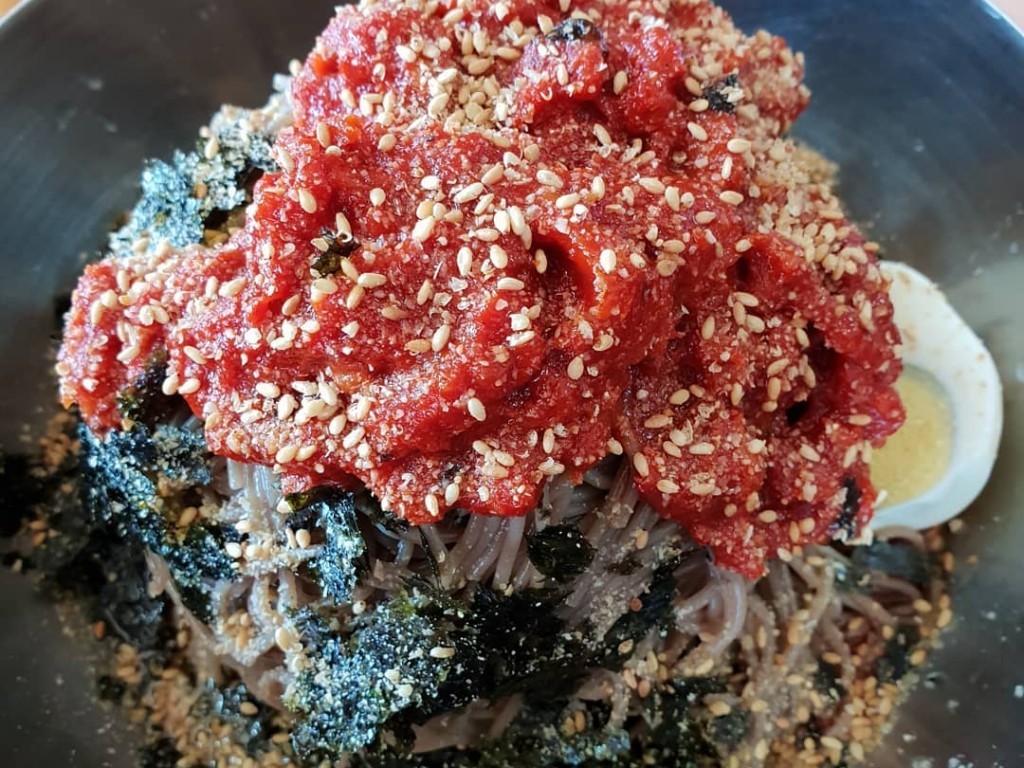 Dongmu Bapsang
10 Yanghwajin-gil, Mapo-gu, Seoul
+82-2-322-6632
Located in the alleyways of Hapjeong-dong, this North Korean restaurant is run by an owner-chef who used to work at Okryu-gwan, a famous Pyongyang restaurant. If you want to try out a humble, homemade North Korean meal, a visit to Dongmu Bapsang is a must.
There are surprisingly many places in Seoul to go enjoy some North Korean food. This November, come make some heartwarming memories of eating North Korean food with your loved ones in Seoul.